On Sunday, July 31, 2016, at approximately 19:07 Engine Company 19 was alerted for a first due house fire in the 12000 block of Lofting Court. Units on the call included 819, 818, 835 and 839, Trucks 828, 814 and Tower 833. Upon arrival Engine company 818 reported fire coming from the garage extending to Division 2. Chief 843A (Havens) and Chief 819 (Howard) responded on the call with the units from Bowie. Command was established and requested the Fire Task Force due to the the extreme hoarding conditions and the difficulty to extinguish the fire. Crews battled the fire for more than an 90 minutes and conducted extensive overhaul. During extensive overhaul and investigation, Fire Investigators located a deceased victim and are currently investigating.

During the call, the Bowie VFD Auxiliary distributed approximately 3 cases of Gatorade and 13 cases of bottled water. This was the second fire of the day for several of the Bowie units and was approximately 1 hour after units cleared from the Anne Arundel County fire. 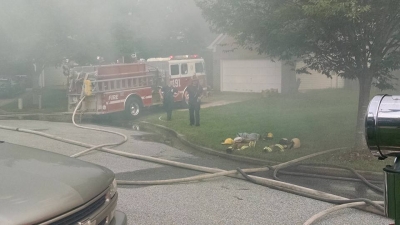 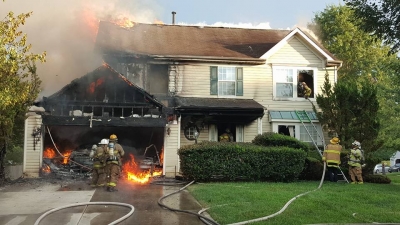 303 entries in the Call History 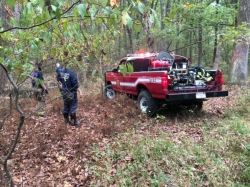 On Sunday October 6th Brush 839, Engine 819b, Chief 819a, along with surrounding units responded to a report of smoke in the area. A brush fire was quickly located in the woods behind the address. Crews had to work for several hours to extinguish the fire due to a lack of access to the seat of the fire. The Bowie VFD Canteen Support unit was also on scene to care for the Firefighters as well.

On Saturday afternoon all 4 Bowie fire stations along with other surrounding departments were alerted for a House Fire in the 12500 bulk of Kavanaugh Lane in the Kenilworth Section. Units arrived on scene reporting smoke showing from the 2nd floor. All companies worked to extinguish the fire quickly.  Fire was mainly contained to the attic. No citizen or Firefighter injuries reported. The home owners are being assist by the Red Cross.

Outside Fire In Company 816's Area

On Friday, April 14th, at 19:00 the alarm was sounded for a house fire in the 12600 block of Kingsfield Lane in Company 816's first due area. Crews arrived on-scene to find a fence and tree on fire, started from an outdoor grill. The fire was quickly knocked and damage to surrounding houses was prevented. Units responding on the call included Engines 816 (Bowie/Northview) and 819 (Bowie/Old Town), Truck 39 (Bowie/Belair), Paramedic Ambulance 816, and the Battali... 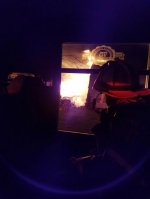 On Sunday, December 18, 2016 @ 7pm,  units from Bowie and the surrounding area were dispatched to the 1800 Block of Price Lane in company 43's first due area for a report of a shed on fire.  First arriving units confirmed a working fire with extension into the house and upgraded the assignment to a full box alarm. Crews worked together to minimize the extent of damage to the dwelling.Units on the upgraded box assignment included Engine Companies 43(Bowie / Pointer Ridge), 19(Bowie ... 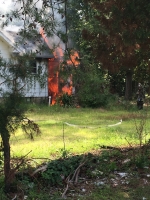 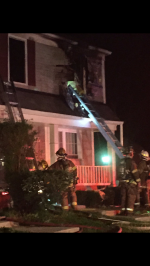 On Thursday, April 21, 2016, units from Bowie and the surrounding area were alerted to a report of a house on fire in the 3400 block of Elenoir Court in Company 16's first due. Units on the call included Engines 816, 843, and 818, Anne Arundel Engine 7, Towers 819 and 839, and Rescue Squad 806. The Bowie VFD Auxiliary was on the scene ensuring crews stayed hydrated.

On Friday, March 25, 2016, at approximately 2345 hours, units from Station 39 were alerted to the area of Racetrack Road and Annapolis Road for the report of a personal injury accident. Units arrived on scene to find 2 vehicles severely damaged. All patients were transported to area medical facilities.

On Wednesday, March 16, 2016, Tower 839 was dispatched to the area of Cheyenne Drive and Carbondale Way in Anne Arundel County for a report of a house fire. Anne Arundel units arrived on scene and confirmed an exterior fire moving vertically on the outside of a house. Tower 839 and Chief 839B responded with 6 and assisted Anne Arundel units with opening up, overhaul, and ventilation as needed. No injuries were reported.

On Friday, March 11, 2016, at approximately 1920 hours, units from Bowie and Glenn Dale were alerted to respond to the report of a personal injury accident with entrapment in the area of Lanham Severn Road and Glenn Dale Boulevard. Units arrived on scene to find two vehicles with one person trapped. Rescue Squad 818 extricated the victim and two adults were transported to area medical facilities. Units on the call included Engine and Ambulance 819, Rescue Squad 818, Medic 818, Battalion Chief 88...

On Saturday, March 5, 2016, at approximately 0230, units were dispatched to the area of Crain Highway and Mitchellville Road for the report of an accident with entrapment in Company 843's first due area. Engine 843 arrived on scene and confirmed the dispatch. Anne Arundel Rescue Squad 7 worked to free the patient and, once removed, the patient was handed over to waiting EMS units. Units on the call included Engine and Ambulance 843, Paramedic Ambulance 816, Anne Arundel Rescue Squad 7, North...

On Thursday, February 4, 2016, units from Bowie and surrounding stations were alerted to respond to the area of 301 and Central Avenue (Company 43's primary response area) for a report of an accident involving a tractor trailer and a car. Initial reports indicated that occupants might be trapped in the vehicle. Engine and Ambulance 843 arrived on scene to find a vehicle and tractor trailer involved, with the tractor trailer on its side. All patients were transported to area hospitals.Photo c...

On Sunday, January 17, 2016, at approximately 0345 units from Bowie and Upper Marlboro were alerted for the personal injury accident with entrapment in the 2200 block of Crain Highway. Engine and Ambulance 843 (Bowie/Pointer Ridge) arrived on the scene to confirm dispatch and established command. Additional units on the call included Rescue Squad and Chief 820 (Marlboro), Ambulance 839 (Bowie/Belair), the Northern EMS Duty Officer, Chief 839B, and Chief 819 (as Battalion Chief 882). Two patients...

On Saturday, January 16, 2016, just after midnight, Engine Company 39 (Bowie/Belair) was alerted to respond to an outside fire in the area of Mase Lane. The Engine arrived in the area and after further investigation came upon a house with fire showing through the window and immediately requested the full assignment. Units on the call included Engines 839, 816 (Bowie/Northview), 818 (Glenn Dale), and 828 (West Lanham Hills); trucks and special services included Tower 819 (Bowie/Old Town), Truck 8... 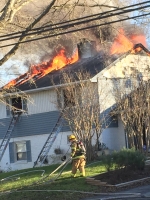 On Sunday, January 3, 2015, units responded for a report of a house on fire in the 7000 block of Legation Road in New Carrollton. Tower 819 was dispatched as the 3rd special service and assumed Rapid Intervention. There were no report of injuries.

On Tuesday, December 22, 2015, at approximately 0300, Tower 839 was alerted to respond mutual aid to Anne Arundel County for the report of a house on fire in the 1400 block of Orleans Court. Tower 839 responded with 6 and arrived to find a working fire in the basement of a townhouse. The crew assisted in the search for a reported trapped occupant, throwing ladders, salvage and overhaul, and venting the structure. Fortunately, the occupant escaped prior to the fire departments' arrival. Tower...

On Saturday, December 19, 2015, at approximately 1230 hours, Engine Company 39 was alerted for the report of a house on fire in the 12100 block of Maddox Lane in their first due area. Other units on the call included Engine Companies 816, 28, Arundel 7. Tower19, Truck43, and Rescue Squad 806. Engine 839 arrived on scene, established tactical command, and provided essential information to PSC. Chief Bashoor (PGFD) arrived on scene and assumed Command. A small fire was found and extinguished in th...

303 entries in the Call History